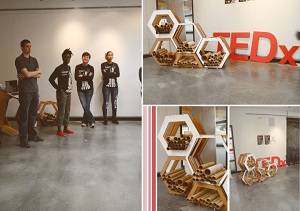 My friend Jan Detter linked me up with the team of students from the inaugural TEDxWakeForestU executive committee in 2012. They asked students from UNCG Interior Architecture program to design and build the set. This was my first opportunity to be a part of a team building a stage set.

I still remember the very first TED Talk I watched. Sir Ken Robinson’s presentation “Do Schools Kill Creativity” holds the record for the most watched TED Talk, that was the one that hooked me. My friend from The StoryLine Project, Jan Detter, introduced me to Sir Robinson. I was introduced to many things I had never heard of by my friends at StoryLine, and I was always delighted by the things these folks introduced to me. That is why I had no hesitations when Jan asked if I could help out with the inaugural TEDxWakeForestU event in 2012. I was immediately impressed with the level of complexity that the students were mastering while working out last minute logistics for the speakers, facilities crews, and stage crews. I was intrigued by the crew of students from UNCG Interior Architecture that showed up on Friday afternoon, 20 hours before show time. They had great energy, and I found myself right in the middle of them as they figured out how to assemble the thousands of laser cut cardboard pieces they brought with them for the stage set. We stayed up late that cold night, and started early the next day assembling the components. I LOVED being a part of the crew. You know, I’ve always been envious of the crew setting up the stage for a concert or show, much more so than feeling any desire to be a performer.

Over the course of the two days I volunteered for the event I also worked behind the scenes to assist transporting and cueing the speakers before and during the show. I was the oldest guy on the crew, but being around so many college students working so hard made me feel so young and energetic. I met lots of interesting people during that show. The opportunity came at a time when I was trying to figure out who I was going to be when I grew up. I know this experience made it easier for me to choose to go back to school and get a degree in Architecture. This opportunity also made me known to the executive committee for TEDxWakeForestU. They pass down notes each year, and underclassmen move up into lead roles each year, so I had an in. 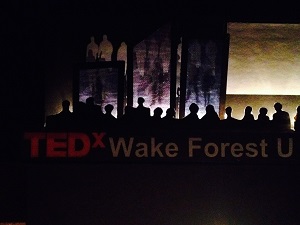 I have been able to assist in some capacity almost every year since 2012. Last year I only supplied oversite for the construction of the set, and led Wake Forest students to assemble the final set. This year the executive committee chose to allow me to lead a team of students from Salem College and Forsyth Tech to design and build the set. I am very impressed by the way my team is problem solving and being resourceful. I have a design ideology – Design By Conversation, and my team is reinforcing my confidence in the technique. As we ideate and reiterate we explain our ideas, and absorb others ideas to adapt our own. The results is ideas that would likely be left undiscovered otherwise.

I'm Alan Shelton and I'm a designer and builder of beautiful things. I create custom-made objects for your home or business. I look forward to creating with you.