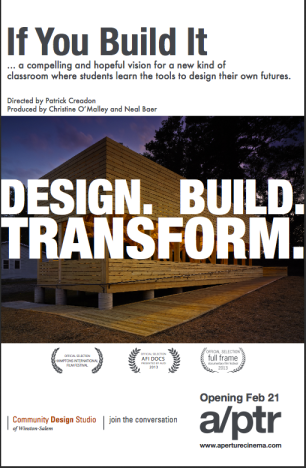 In the summer of 2012 I met a group of talented designers that make up the Community Design Studio of Winston-Salem (CDS). I have been lucky enough to work with some of these talented architects, graphic and industrial designers, and tech savvy professionals on occasion to help add a layer of creativity to our local area. When the leadership of CDS  arranged to bring the film If You Build It to Aperture Cinema of Winston-Salem and host community conversation after each showing, I jumped at the chance to be involved. I actually had no idea how I could help out, but I knew I had to be more than a viewer of this film.

You see this film is about something very important to me – Creative Collaboration. In my life I have been exposed to quite a few collaborative ventures around the design/build premise, and I have found that it fuels my passion in life. By participating in these types of ventures I have discovered my purpose in life – to be a driving force in the success of a design/build community collaborative program. I don’t yet know how this is going to happen, but I know it will. I can feel it deep in my soul.

One of the first projects of this type that I was exposed to was a project of UNCG’s Interior Design Program as they build what is now called “My Sister Susan’s House” a respite home for young at-risk mothers in Greensboro, NC. It was here that I met Robert (pronounced Ro- bear), a French-Canadian Architecture Professor at UNCG. The company I was working for was installing the electronic security systems in the building. My crew of installers came back to the office going on and on about this unique house being built by college students. Eventually I found it necessary to stop by the site to check on the progress and I immediately realized what all of the buzz was about. The design was unlike anything I had seen in person; but what was more unique to me was the atmosphere on the job site. The positive energy of college students doing the construction was intoxicating to me. The source of their energy is more from a place of love and a need for accomplishment, as opposed to a need to make money as quickly as possible and limit liability, which is what I was accustomed to on a job site. The leader of this band of eager beavers was Robert. With his french accent, infectious smile, and long hair he almost looked like one of the students, but it was quickly obvious he was responsible for every move made by all of the students. Robert empowered them to learn by doing, but somehow managed to keep them on track and calmly answer a bazillion questions daily. 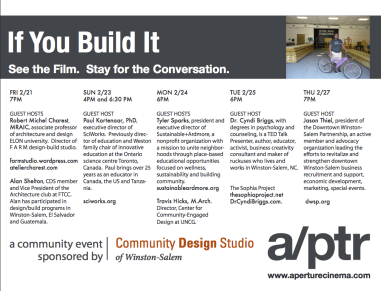 Last week when I discovered that CDS was looking for guest speakers for their film event, and that one of their intended speakers would not be able to attend I immediately offered to do whatever I could to help out. Suddenly I am the guest speaker for one of the events. So I nervously began to prepare myself for the upcoming event, but I also put in a call to Robert to see if he could possibly clear some time in in super-busy schedule to participate. As luck would have it he was available. So now I found myself privileged enough to be sharing the “stage” with my good friend, whom I respect greatly, and participating in a community conversation about something I am very passionate about.

One of the taglines of the film is Design, Build, Transform. I totally get it now. Design/Build type projects are not for everyone, but for those of us that are so inclined, it can be transformative to a degree that is difficult to explain to someone that “doesn’t get it”. For those who do “get it” it’s not simply the words used to describe the transformation, it’s the passion that shows through when we talk about it and do the work. It can be infectious and intoxicating. I will stand by my friend Robert in two days in front of an audience. I hope my passion rather than my nervousness shows through, and I hope we make some new allies in our search to do meaningful work.

One thought on “Design, Build Transform”

I'm Alan Shelton and I'm a designer and builder of beautiful things. I create custom-made objects for your home or business. I look forward to creating with you.